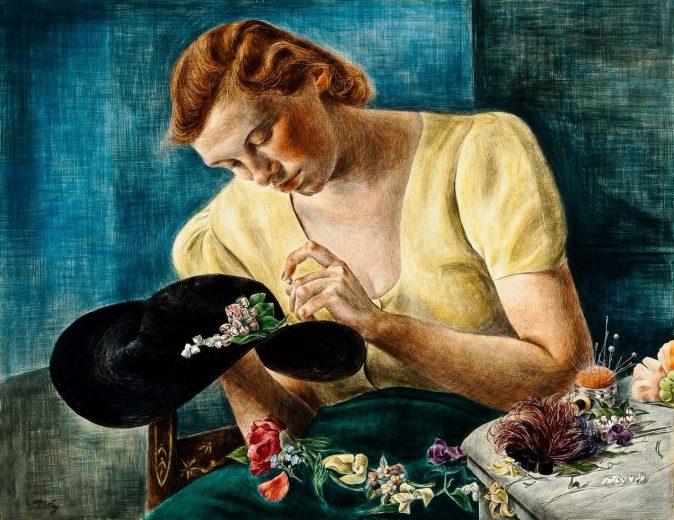 Treasures of the Swope
Wild Flowers
c. 1940
Zoltan Sepeshy (1898 Kassa, Hungary – 1974 Royal Oak, Michigan)
Tempera on panel
25” x 32”
Museum purchase
1942.03
A plush orange pincushion sprouts needles and pins from its round silver base. The object sits atop a bleached wooden table, alongside other scattered paraphernalia of a milliner. The table’s corner juts into the lower right area of the painting with the soft insistence of a housecat bumping for affection, setting off a sequential action of levers originating at the hat decorator’s left elbow, moving along the length of her forearm, then engaging her articulated index finger, which, in turn, presses on a pearlheaded hat pin that is poised, like a bubble at the center of the painting: its pinpoint is deftly propelled into the brim of a stylish wide-brimmed hat. The woman’s right hand is hidden from our view, but we intuit its spread-fingered aspect supporting the hat while artificial lily-of-the-valley and apple blossoms are attached with short, stabbing strokes. The action requires all the woman’s attention, as we can see from her cramped posture of intense concentration. Just as she is absorbed in her task of making the hat beautiful, one gets the sense that the artist was equally consumed with applying his colors to the smooth rectangular panel containing the painting, Wild Flowers (Spring Flowers), by Zoltan Sepeshy.

The four sides of the painting’s rectangle barely allow enough room for the decorator as she bends over her work. Within its confines she seems pinned in place by strong horizontal and vertical lines repeated endlessly in the background, while the insistent proximity of the painting’s upper limit emphasizes her folded form. Yet release can be found in the red and mauve flowers that cavort across her lap while yellow orchid petals call and echo the color of her luminous blouse. A green leaf points to a floral design carved into the wooden back of the chair on which the woman sits, sideways, as if to hold her more tightly as she pivots between the table and the light.
Wild Flowers is painted in the exacting medium of tempera, which comes from dipping a fine sable
brush into a mixture of dry pigment and egg yolk. Unlike oil paint, blending is nearly impossible, but the artist, a brilliant colorist, makes pure colors sing using the technique of optical blending, while modeling forms with the application of layer upon layer of translucent color in crosshatched lines. In Wild Flowers these marks activate the surface of the painting and belie the quiet concentration of the its subject to suggest an introspective state.

Born in Hungary, the only child of an aristocratic family, Zoltan Sepeshy studied at the Royal Academy of Fine Arts in Budapest, and at the Fine Arts Academy in Vienna, where he earned degrees in both Art and Art Education. He emigrated to the United States in 1921, first living in New York, then with an uncle in Detroit. Sepeshy believed his status as an immigrant brought him closer to understanding the United States than many native-born Americans because his every experience was fresh, and his every reaction was a new discovery. In a letter to John Rogers Cox, Director of the Swope in 1942, Sepeshy writes: This painting is one of those rare ones i had a particularly strong affection for, and i am sure that You are well aware of the propitious collaboration of causes that result in such harmonious relation once in a great while.

In Wild Flowers Sepeshy found an opportunity to bring attention to a woman meticulously at work,
monumentalizing her form and emphasizing the beauty to be found in the smallest of endeavors.