Skip to content
Home <Treasures of the Swope<Untitled (Darius II) 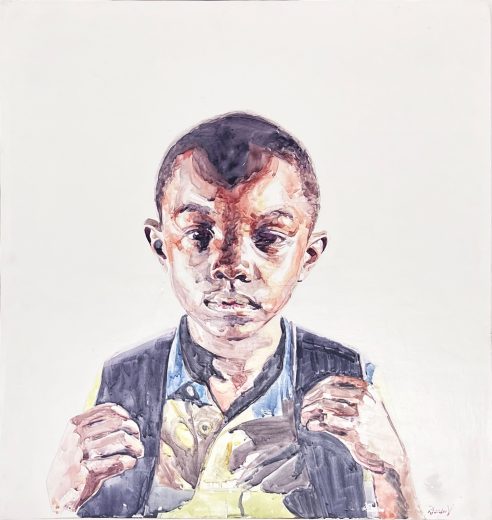 A young boy gazes, unseeing, with what could be described as a 100-yard stare, out from the confines of the rectangle into the viewers’ space. The background is a blank white screen, an inscrutable void. The child, who is Black, is contained by the whiteness surrounding his form. White light is reflected off his facial features and hands, suggesting that he stands before a colorless veil. His hands seem to float weightlessly as he holds the black straps of his backpack with an inexplicably light grip, despite the apparent weight on his shoulders. The straps’ dark stripes echo the vertical shadow that nearly bisects his face, running from the tip of his nose to the softly brushed downward pointing arrow of hair on his forehead. He seems resigned to his fate, imprisoned as he is in a vacuum.

Given the constant stream of strife in our newsfeeds, the attitude he projects is unsurprising. There was once a time when the dread faced by most school-age children had to do with the return to math class. These days it’s different—perhaps especially if you’re a young Black male.

Steward’s choice of a bright white surface on which to paint this delicate, yet powerful portrait in the most demanding of mediums emphasizes the contrast between his richly saturated figures and the stark whiteness of their surroundings. Every figure is a stand-in for the artist, a self-portrait of a young man who grew up in a rough East Cleveland neighborhood. Steward began drawing as a young child, inspired by Teenage Mutant Ninja Turtles and Mortal Kombat. He began exploring the relationship between social issues and the impact of popular culture and the media in the 11th grade at the Cleveland School of the Arts, which seems prescient, considering the impact of social media platforms on society today.

Darius Steward completed his undergraduate degree at the Cleveland Institute of Art in 2008 and his MFA at the University of Delaware in 2010. He recognizes the importance of education and mentorship and devotes his creative practice to addressing cultural and societal conflicts. Figures in his paintings are often metaphorical and help him to bring attention to current issues. His work catalyzes conversations across racial, socioeconomic, gender, and cultural lines.