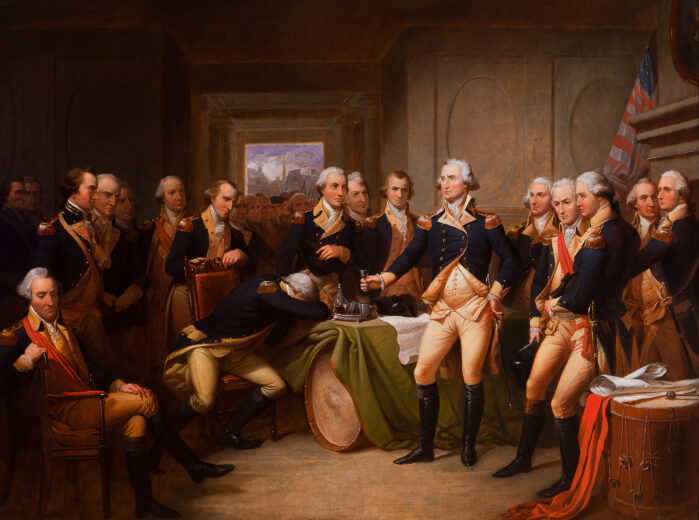 America’s first and most enduring hero is George Washington who led the American forces to victory in the Revolutionary War and then served as our nation’s first president. He set many examples that still endure, and he is a symbol of service above self that still inspires new generations of Americans. Among those examples were his decisions to step down as commander in chief, first of the Continental Army and later after two terms as President of the United States. The American Revolution, in part, was a reaction against the monarchies of Europe, and Washington could have easily stayed in office as an American king. He refused, setting the example for the peaceful transition of power, a peculiarly American trait at the time.

Tompkins H. Matteson was one of the foremost history painters of New York state in the latter 19th century, excelling at portraiture, genre scenes and literary and religious subjects. He was trained in the academic tradition which emphasized the drawing and painting of the human figure as the basis of great art. Historical, literary, Biblical and mythological subjects were important for artists to undertake at the time.

Scenes of the American Revolution were a particularly popular subject of contemporary artists. When Matteson painted this work, Washington had been deceased for 56 years and was still a popular subject, just as President John F. Kennedy is today, 57 years after his death. The Revolution was an historic time and its personages and the Founding Fathers were often portrayed. Images of Washington were especially popular and helped to establish his status and an American hero and icon. Matteson painted numerous canvases related to these subjects, as well as other scenes from America’s earlier history.

In “Washington’s Farewell to His Officers,” the artist presents the scene of General Washington resigning his commission with all the fanfare befitting the subject. In the theatrical style of European Grand Manner history painting, the figures are aligned stage-like, with the officers in the foreground and the citizen soldiers in the background with dramatic lighting on George Washington. By adding details such as the flags, drums and the distraught officer in the center, Matteson made his painting morally uplifting and patriotic as well as accessible and enjoyable to the general public. History paintings of the time, by Matteson and others, were made into widely distributed prints, reaching varied audiences and enhancing the artist’s reputation.

This painting is located in the ground floor gallery of the Swope and is popular with many visitors, especially school tours. It is a fitting painting to highlight this November, the time of both our national election and the celebration of Veterans Day.