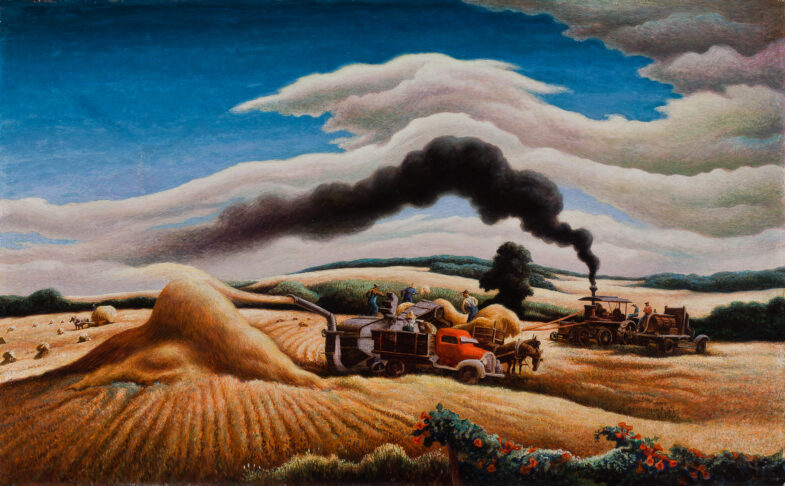 Threshing wheat was once a familiar scene in late summer in the Wabash Valley and still takes place today, though similar activities of harvesting hay and straw are more common now. What isn’t seen now is the steam-powered equipment of the late 19th and early 20th centuries, the type of equipment shown in Thomas Hart Benton’s “Threshing Wheat,” one of the cornerstone’s of the Swope Art Museum’s collection.

Benton achieved a national reputation as one of the three Regional artists that included fellow Midwesterners Grant Wood and John Steuart Curry. On Dec. 24, 1934, he appeared on the cover of Time magazine, and the cover story detailed the new style of painting represented by Benton and his fellow Regionalists. These artists and many others during this era chose to depict the land, customs and people of rural, often disappearing. Agrarian America, and they painted in a direct, representational style. Critics hailed them as founders of a truly American voice, and their art was, and continues to be, very popular with the American public.

Benton started out as a modernist painter, but he shifted his approach in the late 1920s toward a blend of representational forms and abstract design. He became an “enemy of modernism.” By the 1930s he gained fame with exhibitions across the country with numerous awards and his most famous mural cycles.

His work as a muralist is well-known, with one of the early examples now housed in different buildings at Indiana University, Bloomington. The Indiana Murals were commissioned by the State of Indiana for the 1933 Century of Progress Exhibit in Chicago. The murals portray the history of the state, including the Ku Klux Klan period, which some objected to because it was embarrassing to the state. In more recent years, others have objected to the Klan portrayal, misunderstanding that it is simply a historical reference of a time the Klan controlled Indiana, not a celebration of the Klan.

“Threshing Wheat” is one of three canvases of similar themes, and it captures the scene of a steam engine thresher working a Midwestern field. Benton’s “aesthetic emotion” was demonstrated in the stylization of earth and human forms and the related rhythms of the sky and earth, one critic noted. Since the threshing equipment seen here was rapidly being replaced by more advanced technologies, this image can be seen as a bit more nostalgic, precisely the kind of subject that appealed to the average American and that made Thomas Hart Benton art so popular.