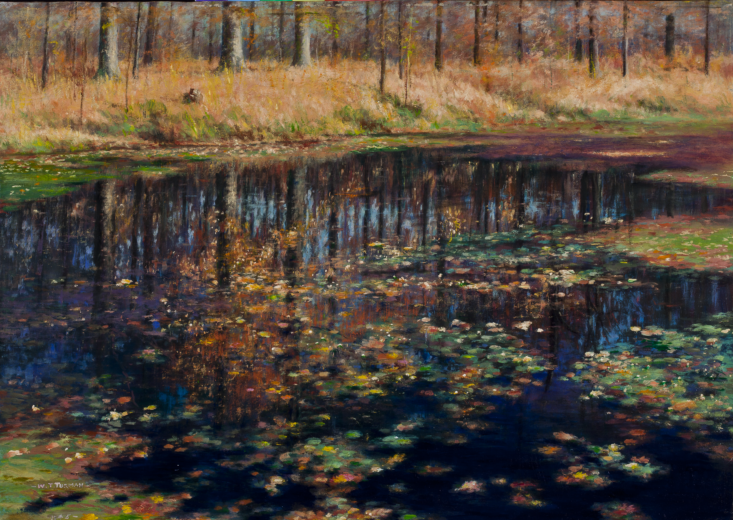 “Jewel Pool” captures the colors of autumn and is one of the best-known impressionist landscapes by Terre Haute artist William T. Turman. Turman enjoyed painting outdoors and often set his easel in one of Terre Haute’s many parks. “Jewel Pool” is an impression of a pond in Deming Woods, one of Turman’s favorite haunts, and is reminiscent of the water lily paintings of Claude Monet.

In addition to his paintings, Turman is known for serving as the first president of the Board of Managers of the Swope Art Museum from its inception until 1957. During his time at the Swope, Turman oversaw the early stages of building one of the best regionalist collections of American Art. Before becoming an artist, Turman graduated from Union Christian College of Merom, south of Terre Haute, with a bachelor’s of arts degree. His first courses in art were at the Chicago Academy of Fine Arts and the School of Art Institute of Chicago. He then furthered his studies under Daniel Garber at the Pennsylvania Academy of the Fine Arts in Philadelphia and in New York.

Turman settled in Terre Haute in 1894 and began a long and illustrious career teaching at what is now Indiana State University. He served as the director of the art department until 1934, and the university dedicated the Turman Gallery in the Fine Arts Building in recognition of his contributions.

He exhibited regularly at the annual Hoosier Salon, the Swope, the John Herron Art Institute in Indianapolis and elsewhere. He was a member of several art organizations, including the Terre Haute Art Association, the Indiana Artists Club and Indiana’s Brown County Gallery Association.

As a painter, Turman was well-known for his portraitures and for his impressionist landscapes. Autumn in Indiana is the most colorful time of year, and “Jewel Pool” reflects it in a timeless manner.