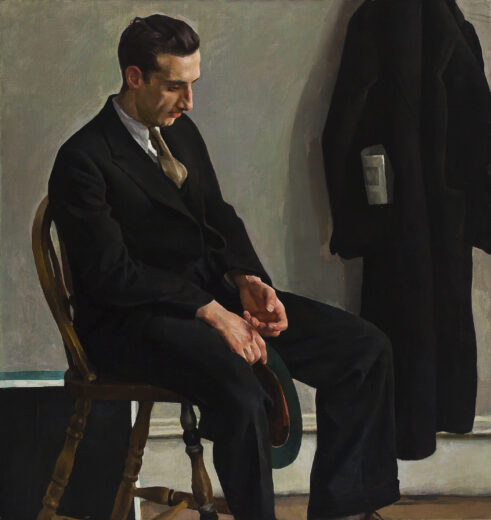 The piece “Young Man Desires Position” has always been on e of the favorite paintings of visitors to the Swope. This fall, the painting was chosen as “most favorite” in the annual “Toast to Autumn” event conducted by the Alliance of the Swope, an auxiliary organization dedicated to support of the museum

While the painting was done in 1930 during the depths of the Great Depression, it speaks to all who have applied for jobs, especially those who have been unsuccessful. The somber palette and strong composition poignantly capture the dejected spirit of a friend of artist Gordon Samstag as he sought a job. It reflected the solemn mood of the country as unemployment reached record highs.

The work graced the cover of the April 1, 1931 issue of the popular American art periodical The Art Digest, thereby catapulting the artist to fame. Kenyon Cox, a critic of the time, observed of the work, “Through command of his technique, as much as through sympathetic feeling, he drives home a sense of what is human and interesting in this disconsolate future.” Elisabeth Luther Cary, the first woman art critic for the New York Times, noted that the painting was “a strong piece of work, strong in composition and in characterization with simplicity of handling, economy of color and striking contrasts of light and dark.”

The painting was acquired by the Swope in 1944 through the short-lived Art Movement Inc., a loosely organized group of artists headquartered in New York who consigned their works to the gallery at relatively low prices in the hope of arousing “the desire to own beautiful oil paintings, not on the part of a few thousand people, but in the minds of millions of people.” Gordon Samstag was pleased to participate in such a worthy cause and his painting has been viewed by tens of thousands of visitors to the Swope since 1944, always without an admission fee. Samstag had a fruitful career, and he and his wife endowed an art museum in Adelaide, Australia.