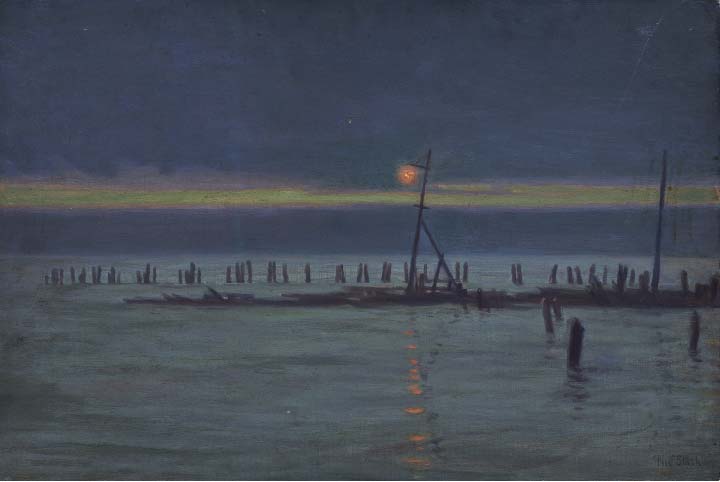 Generations of Hoosiers, including many from Terre Haute, have summered in Leland, Michigan, a small village on the northeastern shores of Lake Michigan. While that began in the days before air conditioning, it continues now with the lake being the major attraction.

Fleeting patterns of light in the sky and upon the water fascinate all, especially artists. Today, we capture scenes like The Harbor Light on our phones and post them on Facebook. In 1917, Otto Stark caught the little light that gleams out each night for the incoming fishing boats. One unidentified critic said, “the artist caught it against a dark sky with one long rift in the clouds and a rival streak of color showing through.”

Another reviewer wrote, after interviewing Stark, that “the artist was not looking for the picture The Harbor Light when it suddenly unfolded before him late one evening. As he turned to go home, along about 9 o’clock, the harbor light twinkled… then he saw this evening’s picture, on which made him stand breathless before it, so big and simple it was, with the blue-grayness shining down from the sky and the gray-blueness reflecting back from the water, and with the evening mystery overall.”

Stark was a member of the Hoosier Group, known for their landscapes. Along with fellow artist Otis Adams, Stark set up his home and studio in tents near the water’s edge. One night in 1917, this scene presented itself. The next year it was exhibited in Indianapolis at the artist’s home studio and at the well-known gallery of H. Lieber and Company. It was acquired by the Swope in 1964 as a gift of Gretchen Stark.