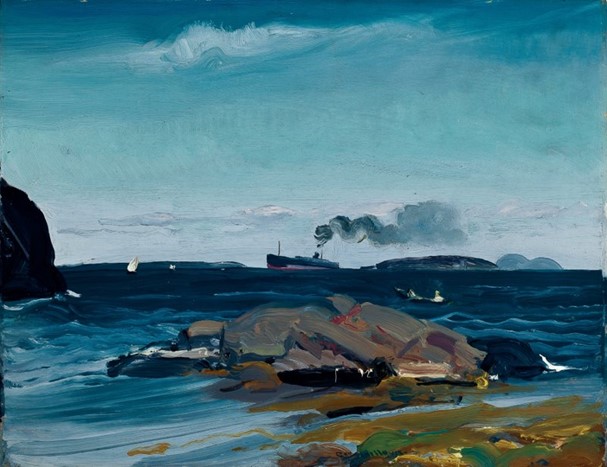 Seascapes were a popular subject of paintings in the late 19th and early 20th centuries, in part because of the work and influence of Winslow Homer.  George Bellows was deeply influenced by Homer’s paintings.  In July 1911 he first visited Monhegan Island, located 20 miles off of the Maine Coast.  The island was already the subject of paintings by Rockwell Kent.

Bellows was inspired by the beautiful scenery and Kent’s work, and he returned to the island in 1913.  During the late summer and early fall of that year, he painted a series of more than 100 paintings of the island and its rugged coastline, including The Freighter, Monhegan, Maine.  While many of the Monhegan works that year are close-up views of rocks and waves crashing on the shores, this work includes a small rowboat heading out to sea and the title freighter billowing smoke on the distant horizon, a contemporary update of Winslow Homer’s subjects of boats and sailing ships.

Working rapidly with a loaded brush, Bellows captures the immediacy of the light, color and atmosphere by laying the colors in broad, lush sweeps of pigment with bold vitality.  He was pleased with the work he completed on Monhegan, suggesting to dealer William Macbeth that they would be suitable for a show: “I am painting on panels 15 x 20 and getting some very complete pictures which are a decided departure on my part in color.”

In January 1914, Bellows had a solo exhibition at the Montross Gallery in New York that included The Freighter, Monhegan, Maine and other of his Monhegan paintings.  This painting was an early acquisition of the Swope in 1944.