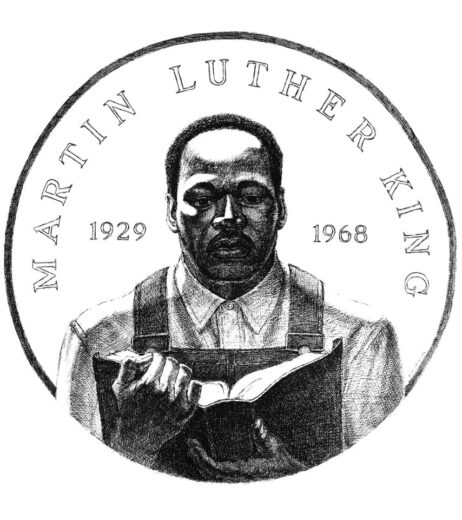 Billy Morrow Jackson’s (Kansas City, Missouri 1926 – 2006 Urbana, Illinois) Protest Drawings were made in 1963-64 in response to the Birmingham, AL church bombing and the killing of several civil rights workers in Mississippi. In 1965, Jackson published a series of offset lithographic reproductions of the drawings, with all proceeds donated to various civil rights organizations. When starting on this portrait of Martin Luther King, Jr., Jackson was struck by the unusual symmetry of King’s face. Never one to miss metaphor or the opportunity for additional meaning in a work, he saw the symmetry as a stand-in for MLK’s broadened vision of freedom, reaching out to embrace all those who suffer disadvantage in modern society, a vision beyond race. Printed three years after the first set of prints, the proceeds from this specific print went towards raising funds to provide financial aid to students from lower income families to attend the University of Illinois, Urbana-Champaign, where Jackson taught for 30 years.

Jackson stated, “As the drama of the Great Civil Rights movement grew to more and more dramatic proportions, the pressure on the conscience of sympathetic Americans grew as well … appalled at the apathy of a nation in the face of overt inhumanity…I was stricken by all this…stricken because in this dark mirror I saw my own reflection and was not pleased. Indeed, I was stricken at my own apathy…as a human person, as an artist, as an American.”

Sylvia Jackson, the artist’s youngest daughter, remembers, “These prints were created because Dad wanted to go South and support the movement. However, Mom was fearful as she knew it wasn’t safe. She told him he couldn’t risk his life and leave her with four young (bi-racial) children.  She suggested he use his art as a method of protest and he went into the small corner studio in our basement and developed these powerful ‘statements’ against racial injustice and hate within society and political structures.”