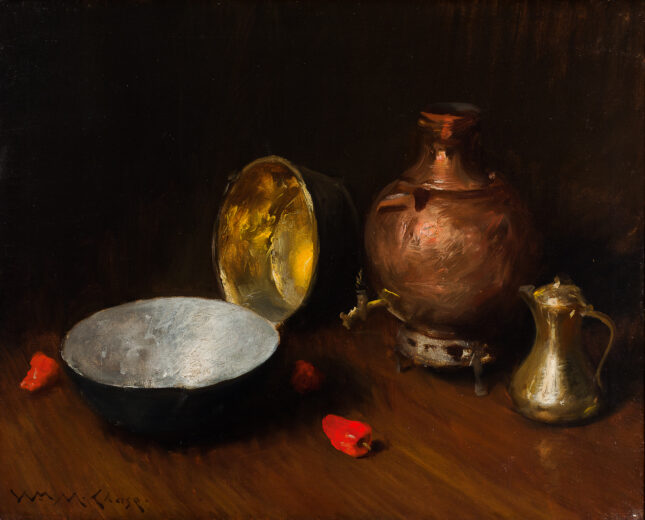 Born in Nineveh, Indiana, William Merritt Chase became a noted painter both in America and in Europe. At 12 years of age the family moved to Indianapolis where he first studied and then moved to New York to the National Academy of Design. A group of businessmen offered to send him to Europe to study, and he is said to have replied, “My God, I’d rather go to Europe than go to heaven.”

In Munich he became interested in more dramatic styles as well as the painterly realism of Peter Paul Rubens and other old masters. It is this style that is evident in “Still Life with Urns and Red Peppers.”

A simple grouping of silver creamer, a tall copper samovar, an upturned brass kettle and a pewter bowl form a gentle arc on an upwardly tilted surface receding diagonally. IN the foreground a red pepper catches the eye and directs attention to the rich depths of the painting.

A simple subject, but one that captures the beauty of the ordinary in our lives. The painting highlights Chase’s skills of capturing vibrant luminosity and the play of gleaming light as it bounces on surfaces and textures. Distinguishing the commonplace is something Chase pressed on his students throughout his teaching career.

Chase’s reputation is largely based on park scenes and portraits, most of which he did while spending the largest part of his career in New York City. His summers teaching in Southhampton introduced him to New York Society and he  a became well-known portraitist. On elf his more famous works is “Lady in Black,” which he donated to the Metropolitan Museum of Art.