Skip to content
Home <Treasures of the Swope<Spring in Town, Grant Wood 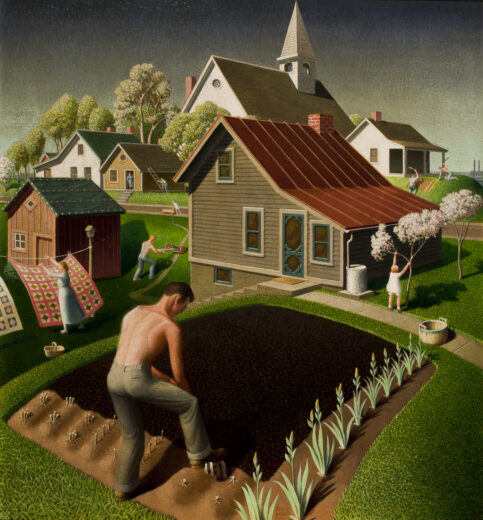 Grant Wood is best known for his iconic “American Gothic,” one of the most recognized paintings in the world, alongside da Vinci’s Mona Lisa. his painting, “Spring in Town” was one of the first acquired by the Swope in 1941, months before the museum opened. And it is one of the most loved.

The painting captures a scene familiar to small town, Midwestern America, the garden in the backyard, particularly prevalent during the Great Depression and then during the war years as a Victory Garden. And it is still true today when local gardeners plant potatoes and onion sets as the March sun warms the soil.

Wood was influenced by the hard-edged and deeply detailed realism of 16th-century Flemish and German masters such as Jan Van Eyck. In his paintings, from the 1930s and ’40s, there is also a stylization to his undulated and rounded forms. In this idealized vision of the American heartland, self-sufficient neighbors plant gardens, pick fruit, repair their roofs and clean their rugs and quilts.

The painting demonstrates a nostalgia for agrarian America, at a time when the country’s landscape is changing. Note the industrial smokestacks in the distance. It was also one of Wood’s last two paintings. Wood was painting “Spring in Town” along with “Spring in Country” in 1941.

The Swope acquired the painting in 1941 in a purchase by museum director John Rogers Cox and his wife heroine on a buying trip to New York City. The following spring it graced the cover of the Saturday Evening post, on elf the leading circulation magazines in the United States at the time. It was published just weeks after the Swope opened its doors for the first time.

Wood explained that in paintings like this he sought to convey a wide American audience “the perfect picture of a country rich in the arts of peace; a homely lovable nation, infinitely worth any sacrifice necessary to its preservation.” With the United States having just entered World War II, Wood’s words and image must have struck a particularly symbolic note for the American people.

It continues today to reflect the values of small-town America.