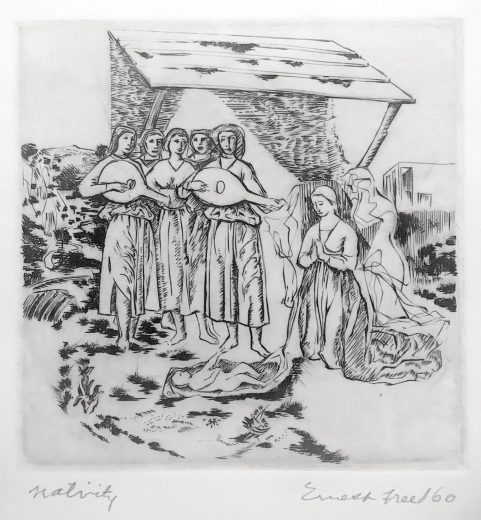 Intaglio, with indications of drypoint

Scenes of the nativity were born in the Italian Renaissance, an invention of St. Francis of Assisi, whose life’s-work was to make the stories in the scriptures accessible to a population not schooled in Latin. Artists became inventive, as they had to convey the complexities of church doctrine using only pictures. One of the most successful of these artists from the early Renaissance was Piero della Francesca (about 1415-1492). Piero’s Nativity is an oil painting—an experimental material at that time—resides in The National Gallery of London. Piero’s painting can be viewed here: https://www.nationalgallery.org.uk/paintings/piero-della-francesca-the-nativity In it he drew from the environs of his hometown, Sansepolcro, to create a scene that was relatable to his contemporaries. Piero’s works provided ample fodder for students of the arts for centuries afterwards, who were inspired by the refined and meditative nature of his works, his cool color palette and geometrical compositions.

Artists “study” the work of other artists by making copies of their work. The process of making a drawing from a masterwork allows the artist to absorb innumerable lessons in composition, the hierarchy of seeing, and gives insights as to the intention of the artist they study. Ernest Bradfield Freed began his artistic career by studying illustrations in magazines, filling “many drawing books” as a boy. He received formal training later, earning his MFA from the University of Illinois, then studying at the Pennsylvania Academy of Fine Arts in Philadelphia. He spent a year in Iowa learning mural craft under the tutelage of Grant Wood. Although Freed started out as an artist who created naturalistic images, he later tended toward abstraction with sweeping lines and shapes. Nativity was printed late in his career and represents an attempt to synthesize both styles.

It is useful to compare the artworks made by these two artists with an ocean and centuries between them. Freed’s Nativity is an intaglio print, a technique in which Freed was considered a master: fearless in his use of experimentation. Both pieces are nearly identical in the arrangement of forms. Each features a decrepit brick lean-to, the interior space defined by a bright triangle of light, its hypotenuse leading the eye to the radiant face of the Virgin Mary in the middle ground. She, in turn, projects her adoring gaze towards a naked infant lying in the foreground on a bunched section of her cloak, protecting him from the hard, rocky ground. She is kneeling in the dirt, her palms pressed together in prayer. Five standing angels sing choruses above the child’s helpless form, while the necks of the lutes they play direct our gaze back to Mary.

Freed has retained the geometry of Piero, the stony ground tufted with scruffy plants, as well as the flowing drapery that lends volume and elegance to the figures, but he has taken liberties with some other aspects of the composition. Piero’s painting includes a donkey braying along with the angelic chorus in a perhaps complicated dissonance. Freed left it out. Two shepherds and the seated Joseph are combined into one figure in Freed’s print, delineated, along with the figure of the bull, with a lyrical line drawn with a stylus. Where Piero painted the skyline of Sansepolcro, Freed contemporized the scene by the inclusion of a boxy, modernistic construction, bringing the narrative into our space and time in a continuous conversation with the past.