Skip to content
Home <Treasures of the Swope<Garden in Giverny, Mary Fairchild MacMonnies 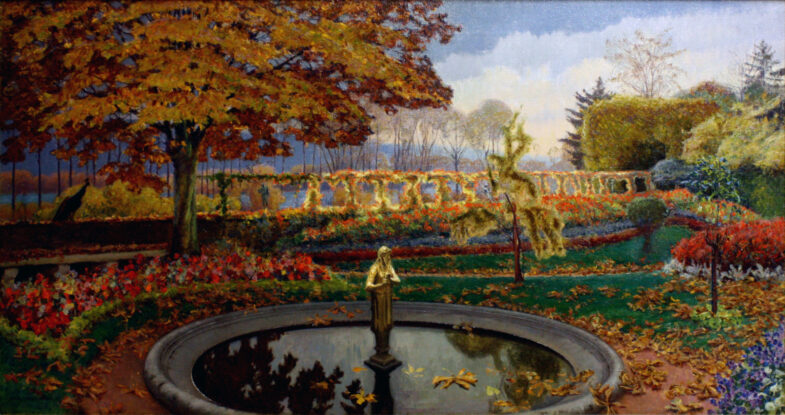 Garden in Giverny is “one of the great paintings created in that most famous of all Impressionist art colonies”according to noted American art historian, Dr. William H. Gerdts. It is one of the paintings featured in the current exhibit, Renoir and the Hoosier Impressionists, now on view in the redone first floor gallery of the Swope.

The painting is by Mary Fairchild MacMonnies, one of the most important woman artists of her day. Along with her husband, noted sculptor Frederick MacMonnies, she began frequenting Giverny around 1888. Later they purchased an estate next to Claude Monet, who had made Giverny famous.

Garden in Giverny is one of several seasonal paintings MacMonnies did in her garden. The time is an autumn sunrise in all its luminosity.

Mary Fairchild MacMonnies studied at Washington University of St. Louis and became its first woman faculty member. For a quarter of a century, she was one of the leading figures in a large community of American women artists who went to Paris to study.

At the Swope, she is best known for Five O’Clock Tea, the large Impressionist work that anchors the west end of the Zaun Gallery on the first floor. Her paintings are also in the National Academy in New York City and Musee Vernon in France.

At age 27, MacMonnies moved to Paris to study at the Academie Julian where she studied with several masters. It was there that she experimented with the bright, sunlit style that became her trademark.

She met the young, charismatic sculptor Frederick MacMonnies, offered him apartment and studio space, and soon elpoed with him. He is best known for his sculpture of Nathan Hale in New York City’s City Hall Park and a sculpture group for the Soldiers’ and Sailors’ Memorial Arch in Brooklyn.

At the same time, she exhibitied at the Paris Exposition Universelle and was soon recognized as one of the best-known American painters in Paris. Both Mary and Frederick received commissions for the 1893 Chicago Exposition: Frederick to create the centerpiece majestic Columbian fountain; Mary to paint a giant mural, Primitive Woman, for the rotunda of the Woman’s Building. Mary Cassatt did the companion work, Modern Woman.

The couple divorced after having three children. Mary Fairchild MacMonnies then married Will Low and moved to New Yrok. She exhibited at teh 1904 World’s Fair and continued to paint. Toward the end of her life, she painted portraits, including one of Fanny Stevenson, widow of Robert Louis Stevenson. She died in 1946.

Garden in Giverny will be on display through May 30.