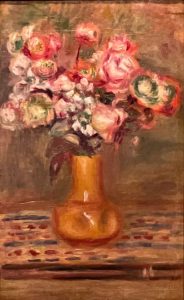 Fleurs dans un vase jaune, by French Impressionist painter, Pierre-Auguste Renoir, is a vibrant oil painting now on display at the Swope Art Museum in the exhibition, Renoir and the Hoosier Impressionists, inspired by the extraordinary loan of the Renoir by Kathy George Conforti. Long before it came into her possession, the painting was acquired from the artist by Ambroise Vollard, a French art dealer, who played a large role in introducing French contemporary art to a skeptical public at the beginning of the twentieth century. He is credited with providing exposure and emotional support to numerous then-unknown artists, including Paul Cézanne, Pablo Picasso, Paul Gauguin, and Vincent van Gogh. The painting was exhibited in Montreal, London, and New York, then purchased from a New York gallery in 1954 by Ms. Conforti’s grandmother, Mary Fendrich Hulman.

Renoir was a leading painter in the development of the Impressionist style, characterized by rapidly executed short, colorful brush strokes. Fleurs dans un vase jaune was painted in Renoir’s late period, when, crippled with rheumatism, he began to look back to classical themes in art and artists of the Renaissance. Stories from Greek mythology provided ample metaphors for the human condition: love, loss, death, and eternity were personified by gods and goddesses and portrayed in luscious oil paintings by the likes of Titian and Rubens.

Although Renoir may be best known for his voluptuous nudes from this period, his conceptual ideas permeated every artwork he made, regardless of subject matter. A simple still life of flowers in a yellow vase was an opportunity to study form and color with painterly strokes to convey the rich fecundity of nature with atmosphere and life. In his own words—Painting flowers is a form of mental relaxation . . . When I am painting flowers I can experiment boldly with tones and values without worrying about destroying the whole painting. (Renoir et ses amis, Georges Rivière, Paris, 1921)

Pink anemones appear to explode from the small vase, which rests on a patterned cloth on a table. Anemones, or windflower, are harbingers of spring and hope, and the profuse bouquet takes up nearly half of Renoir’s painting. Could they represent the painter’s own sense of still-burgeoning creativity? Trapped in an ill and aged body, he continued to paint after he could no longer walk, with brushes wrapped in cloth so that he could grasp their handles. The vase is pinched and small, the flowers exuberant as they reach for the light.