Skip to content
Home <Treasures of the Swope<Fishermen in a Gorge, Thomas Doughty 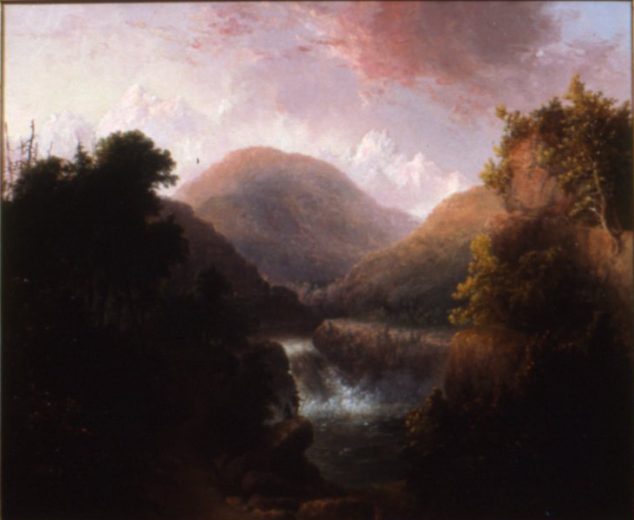 Thomas Doughty was a member of the group of American landscape painters who worked in the Hudson River area during the period 1826 – 1876. A native of Philadelphia, Doughty represents a link between the 18th century pastoral style of landscape painting first imported from England and the passionate language of the sublime introduced later by Thomas Cole, founder of the Hudson River School. Their romantic, poetic landscapes are in the tradition of European painters who studied in Italy, formally composed and precise in detail.

Doughty’s first career was as a currier, or leatherworker. As a painter, he was self-taught, learning composition by studying the works of immigrant English landscapists, who earlier had popularized the topographic landscape manner: map-like renderings with minimal interest in light, atmosphere, or mood.

His early paintings simulate nature’s light, atmosphere, moisture, transient shadow patterns, rustic vigor, and untamed grandeur. In Fishermen in a Gorge, Doughty’s love of physical beauty and wonder of nature is composed with linear precision and tonal contrasts influenced by the printmaking technique of engraving.

Even earlier than Thomas Cole, Doughty painted the wild scenes of America, as distinct from the idealized landscapes of European art. He was particularly fond of depicting land-locked lakes and cascade-fed pools where a fisherman is dwarfed by the magnificence of nature. Humankind’s insignificance in the grand scheme of things is a moralizing sentiment which links Doughty to the romantic movement of the early 19th century.

Ultimately Doughty synthesized the vernacular American idiom with the classical style of the 17th century French artist Claude Lorraine. In the manner of Claude, the dark foreground in this painting yields to a sunlit body of water, which leads the eye to the horizon where the towering mountain peaks merge with the sky. Claudian, too, is the practice of “framing” the center of the scene with great trees. The sun-drenched atmosphere which softens and harmonizes the whole also derives from Claude.