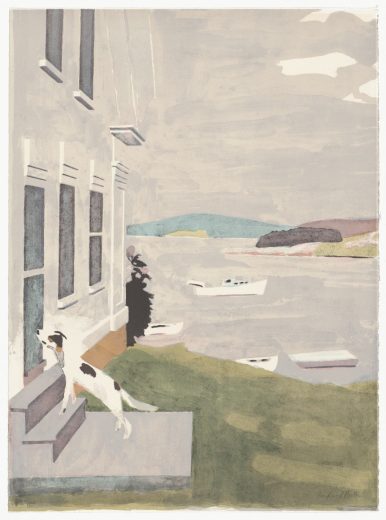 Dog at the Door (from Ten Lithographs by Ten Artists)

Dog at the Door is a rectangular lithographic print that is taller than wide. Perhaps the first hint that what appears to be a landscape is something more. Within it, we feel as much as see the silvery atmosphere of an overcast day at the seashore. A white house fills the left third of the print. In the lower left corner stands a black and white spotted dog, his forelegs on the first step: his nose almost touching the screen door. Receding angles in the architectural features of the house guide the eye past the dog, across an expanse of water to a hill in the distance, its colors muted by a scrim of salt haze. Porter’s masterfully subtle manipulation of color in delicate washes indicates the distance across the span of gray water with the principle of atmospheric perspective.

Strong but diffused sunlight bleaches details, flattening forms into shapes of various sizes and tonal values. These chromatic black and gray shapes are modified and repeated in contrast with lighter values, to lead the viewer on a meandering path from foreground to background. White shapes in the upper right are realized as openings in the cloud cover once one notices corresponding light patches in the green lawn in the lower right foreground. Three white boats and a dock float serenely in the middle ground, the constellation they make emphasizes the empty void between them, further enhancing the sense of airy spatial depth.

Fairfield Porter was a figurative painter at a time when abstract art dominated the art world. He admired the Spanish painter, Velasquez for his skill in relinquishing control of the paint, and for his objectivity when using nature as inspiration and subject. But his biggest influence may have been Édouard Vuillard, the French Nabi painter who was, in turn, influenced by Japanese woodblock prints. Porter’s domestic interiors reflect similar sensibilities. After seeing an exhibition of Vuillard and Bonnard in Chicago in 1938, in the same interview, he states “. . . why does one think of doing anything else when it’s so natural to do this.”

Porter’s father was an architect and built their house on Great Spruce Head Island in Penobscot Bay in Maine. In an interview with Paul Cummings for the American Art Journal [vol.12, No. 2 (1972)] he talks about whenever he paints the house in Maine, he is also painting a portrait of his father. Could he be on the other side of the door, reaching for the handle to let the dog in? Or does he exist in the gaze we share of this quiet scene?