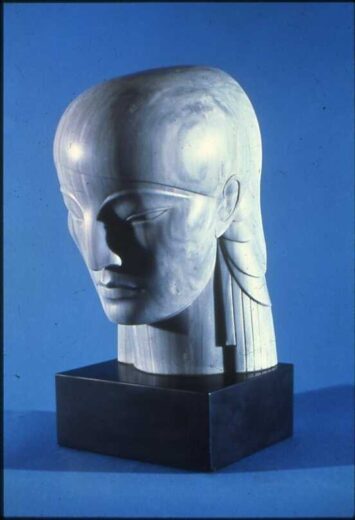 The Swope collection contains a number of sculptures, and one of the most popular and dramatic is “Cretan Woman” by Boris Lovet-Lorski, a Lithuanian-born sculptor, lithographer and painter who contributed significantly to the American Art Deco movement.

His original training was as an architect. This background, along with the flattened aesthetic of Art Deco, contributed to an original style. That style is evident in “Cretan Woman” whose mask-like appearance does not portray an individual but rather represents a universal type.

Her exotic, narrow, slanted eyes are a unique characteristic of the artist’s sculpted heads, which he termed a Gothic-eye. Included in his major solo exhibition at Washington, D.C.’s Cororan Gallery of Art in 1939, “Cretan Woman” exemplifies Lovet-Lorski’s approach to sculpture in the 1920s and 1930s: “Not naturalism, but stylization of the human body carried to such a degree of perfection that it creates real life, more real than the life we actually live.”

Lovet-Lorski used a variety of media in his work, including the traditional ones of bronze, granite, and Carrara marble. However, he often employed types of marble such as rose marble of Milan, black marble of Belgium, and blue marble. For his sculpture “Cretan Woman” he befittingly chose marble of Crete and allowed the rich grain, or the pattern of the stone, to become part of the composition. He hand-carved and highly polished each of his sculptures.

His first one-man show was in Boston in 1925, the year he became an American citizen. He was then invited to teach t the Milwaukee Art Institute and developed a reputation which he carried with him to New York. IN the 1930s he spent time in Hollywood and designed busts and portraits of celebrated personalities of the time. His success enabled him to maintain studios simultaneously in New York, Rome, and Paris.