Skip to content
Home <Treasures of the Swope<Creek in Winter, Paul Turner Sargent 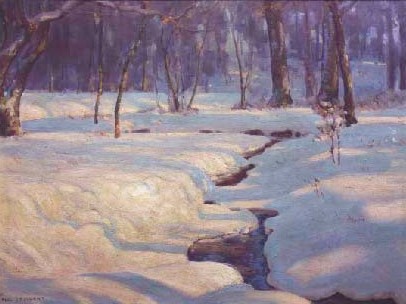 The Swope Art Gallery of Art, as it was then known, purchased Creek in Winter by Paul Turner Sargent in March of 1944 after having displayed it during the winter of 1943-44 in an exhibition featuring Brown County artists. Sargent described his method of working in a letter to the curator: Creek in Winter was painted in a studio from a “sketch made from nature in the woods near my home.”

The handwritten label originally attached to the work had an asking price of $300. Hazel Dodge, curator at the Swope, wrote to Sargent: “…we were hoping you could see your way to reduce this price, say at least $50.” Sargent was born on the family farm in Hutton Township, Coles County, Illinois, where his artistic talent was recognized and encouraged from an early age. Sargent’s affection for the environs of the farm, fields, and woods can be plainly seen in the lively brushwork and light-filled palette of his paintings. These subjects sustained him throughout a career that produced some 7,000 sketches and canvases.

He eventually went on to study at the Art Institute of Chicago and painted several murals in the city. After coming home to the farm in Illinois he began to travel for inspiration and to find new galleries in Florida and the Midwest. In 1920 he visited Brown County, where he met Adolph Shulz and joined the artist colony there. The Brown County Art Colony was by then well-established; works by members T.C. Steele, Otto Stark, and other Hoosier Impressionists are still central to the Swope’s identity. It was there that Sargent painted one of his best-known works, entitled “Water Boy,” which was purchased by Marshall Field and Company to publish in a calendar.

Sargent returned to Eastern Illinois State Teacher’s College to teach private art classes and from 1938 to 1942 he taught landscape painting at the college through extension courses. Ralph Wickiser, who became a teacher and administrator at Pratt Institute, and Alice Baber, a painter in the Color Field school of Abstract Expressionism, are among the students he taught in that program.

Sargent agreed to sell his painting of woods and creek covered in a deep blanket of snow, a scene that may be familiar to anyone who has trudged through Indiana woods in winter, for $250 to the Swope. By contributing to our understanding of Hoosier Impressionists, Creek in Winter was worth the investment.