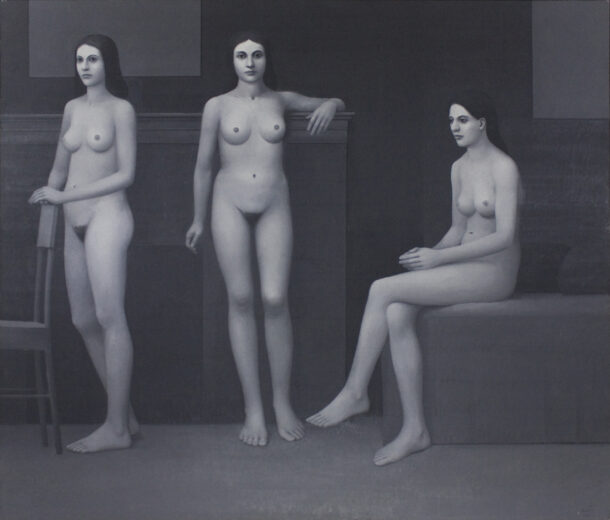 On April 13, 2020, American artist and university professor William Bailey passed away at age 89. The Stage, 1964, is in the permanent art collection at the Swope Art Museum. Most visitors would recognize this work as it stands out among the works since 1950 in the Hodge Gallery. This large, black and white, painting depicts three nude figures. Two stand and gaze directly at the viewer, as one sits and looks away. With all of the figures being fully nude, many unanswered questions arise from the viewer. “Why?” is a main question viewers want answered.

“Painting is about painting to me, not about stories,” says Bailey in his interview with Mark D. Mitchell at Yale University when discussing his work at his retrospective Looking Through Time.

Observing Bailey’s work creates a unique feeling. Known as a contemporary realist painter, Bailey’s large paintings are surprisingly not painted from life. Comparing his figurative work to his still life paintings are also a unique experience. Throughout his interview, Bailey explains that he felt his painting were for himself to ‘gain a mastery of something’. Although this does not answer the questions of ‘why’, in regards specifically to his figurative work, it opens the minds of those who view the many paintings of William Bailey. Unfortunately, the answer of “why”, might never be answered about The Stage.

One interesting fact found at the Swope about this particular artwork was from October of 1969. Howard E. Wooden, the Director of the Swope at that time, wrote a letter to Mr. Gerold Frank thanking him for his donation of William Bailey’s piece, The Stage.

“I had seen this work in New York late last summer and was enthusiastic then. Having it here at the Swope Art Gallery, I have had the chance to examine it more closely and to “live” with it, so to speak, and am now even more excited about having it in our collection. It is a masterful composition and technically a thoroughly competent work. It constitutes a major addition to our collection – which incidentally, has focused primarily on American paintings since the gallery was first founded.”

Check out the links below for information about the American artist William Bailey and his work.