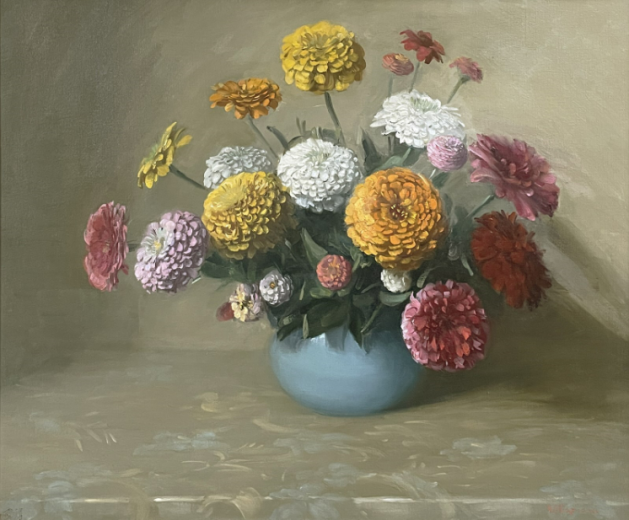 Cari, as he was known to his friends, emigrated to America from Italy to Springfield, Massachusetts with his family at the age of three. His artistic talent was recognized early, and he was granted a fellowship at the Louis Comfort Tiffany Foundation in Oyster Bay, Long Island, where he lived in the mansion and tended the gardens. He moved to Manhattan to study at the National Academy of Design, and later at the Art Students League, where he met his lifelong companion, Indiana painter Marie Goth. With the onset of WWI Cariani enlisted in the armed forces and was in some of the most horrific battles of the war. He returned shell-shocked and confided to Marie that he had lost the will to paint. She immediately invited him to her cabin studio in Brown County, to recover in the “Peaceful Valley” as it was dubbed by members of the Hoosier Group.

While Marie specialized in portrait painting, Cari responded to the rolling topography made famous by the likes of T.C. Steele, Clifton Wheeler, and Carl Graf, who married Marie’s sister Genevieve, also a painter. Marie built a studio for Cari across the ravine from the one she shared with her sister, and Cariani repaid the kindness by preparing meals and planting prolific vegetable and flower gardens on the property. Taking on these roles no doubt allowed Marie to continue with her successful painting career, which included the first official portrait of a governor, Paul V. McNutt, and Hoosier author James Whitcomb Riley.

Just as when they were students in New York sketching and painting along the Hudson River docks and Central Park, Cari and Marie would traipse the hills and creeks, loaded down with easels and palettes in search of inspirational subjects, often in the company of Genevieve and Carl. For relaxation, the couple would paint flowers from their garden. This is how still-life paintings like Bowl of Zinnias came about. One can imagine the pleasures of selecting colorful blossoms on a sweltering summer day; the consideration of their arrangement in a blue bowl in the cool light of the studio.

Cariani often painted such compositions placed atop a delicately patterned taupe and blue flowered cloth. An intermittent stripe highlights where it breaks across the table edge in the foreground and establishes a syncopated rhythm for the rest of the elements in the painting. The bowl is set slightly to the right of the  center, allowing one pink blossom to extend, cantilevered, towards the light from an unseen source to the left of the canvas. His ability to represent the flowers’ forms as they turn away from the picture plane, along with his use of atmospheric perspective on this miniature scale, establishes a powerful sense of rotation. Their multi-layered petals dance like colorful fireworks or the rising and falling motion of a Ferris wheel—typical summer pursuits.

Read Previous Treasures of the Swope