In December of 1944, the Swope’s second director (1944-60), Dr. Allen Albert, and curator Hazel Dodge announced plans for a new and exciting annual exhibition where all artists of Terre Haute and vicinity could enter their work. They planned for it to become as permanent and noteworthy as the Hoosier Salon program, and the first Wabash Valley show opened May 6, 1945 to an outstanding attendance of 350 people.

The Wabash Valley Exhibition remains one of the Museum’s most popular events, attracting a diverse array of artists and patrons alike. Because of this, it is safe to say Dr. Albert and Ms. Dodge achieved their goal of furthering the support and interest in Midwestern art.

This year’s distinguished juror is independent filmmaker Louis Cox. Brooklyn-based Cox has deep ties to the Swope — his grandfather John Rogers Cox was the first director of the Museum in 1941, and along with his wife Hermine Haslem, purchased the founding collection.

Louis is an alumnus of the New School in New York City, where he studied literature and screenwriting while assistant teaching for cinematography and lighting courses. He went on to work at The-Artery, a small VFX studio in Manhattan where he served as a production coordinator on several projects including those with Mercedes-Benz, Netflix, and Warner Bros Pictures. He has previously taught for the International Center of Photography along with the School of Creative and Performing Arts. Most recently Louis completed work on his feature length film ‘Now Again’ acting as both writer and cinematographer.

View this year’s selections below; click on the photo for more details. The full list of award winners can be found under the photo gallery. 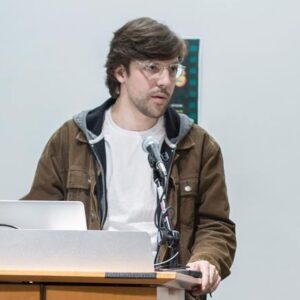 Picking a show is hard. Seventy-six years ago, my grandfather John Rogers Cox traveled from Indiana to New York City with my grandmother Hermine Mayer Haslem to gather what would later become the core collection of The Swope Art Museum. Now over three quarters of a century later I find myself being given the extraordinary honor of selecting the work for this year’s 76th Annual Wabash Valley Exhibition.

In preparing for this I went thumbing through my father’s bookshelves for wisdom… and that’s where I discovered a copy of Art Digest from 1942 that became my cornerstone of intention for this year’s exhibition. Between the old and yellow pages, I discovered that the museum’s founder Sheldon Swope had devoted much of his life towards building this museum and that my grandfather had been interviewed stating their policy was as follows: “The Swope Art Gallery will devote the principle portion of its income to the purchase of contemporary American art in the belief that the present day American artists are the masters of tomorrow.”

I knew what he meant. At the time, the idea was to go after old masters and known works but my grandfather wanted “to put our gas station on a new corner.”  This sort of risk taking, trying new things, and trusting your gut. That’s something I can get behind. That’s what real art is all about. Looking back years later, I think most people would agree my grandfather made excellent choices. The collection at the Swope is world-renowned and the artists contained within its walls are masters in their own right.

It’s an oddity of art that we never really know what’s “good” as it’s happening. There are those that say it’s good. Sources we trust to deliver us content. But really it’s only time that tells. That, and our gut. We all know a good piece when we see one. We can feel it.

If we’re lucky. Sometimes we can put words to it.

In a 1951 edition of American Artist my grandfather said, “Certainly no one ever painted what a painter said and hung it on the wall. Yet almost everyone is concerned at one time or another has wasted his time and energy trying to explain something for which there is no real answer in words. Still we can’t put the screws on thinking and talking about pictures with an arbitrary wave of the hand. If you do not talk about art, you’re going to think about it; and, if you think about it, then you are going to talk about it; and sooner or later, your ego takes over and you write it down and that’s the cure.” 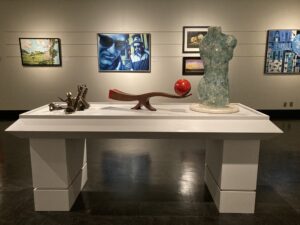 For this reason I ask that you stop reading this immediately and go down to the museum and to see the show in person as soon as possible. There is really nothing I can say that would do justice to the work. But having said that, here is something worth considering when you do find your way there: “Good painting offers a mysterious pleasure that one cannot quite put his finger on because the painter, through honesty and hard work, has actually painted his own personality in a familiar subject; and any person’s personality or character or soul, or whatever your word is for it, is something of an enigma.”

When it comes to my grandfather there is something about his work that just pops in person in a way you can’t describe. Like when you see a beautiful sunset or a stunning set of clouds or the moon and you try to take a photo of it, but the photo doesn’t do it justice. You can’t capture the grandeur, the emotional experience, the near surreal unreal beauty of reality itself. When I had seen his painting “Swamp” I remember describing it later as having glowed red like a radiation bomb. It was something he had painted in 1969.

On my way to juror the exhibition at Swope this year, my fiancé Ashley and I drove from New York to Indiana on November 3rd stopping halfway in Ohio to visit my grandfather’s painting “Gray and Gold” in Cleveland. The painting’s foreground features an intersection of two dirt lanes, as well as a telephone pole emblazoned with political campaign posters. There are huge rolling storm clouds forming overhead. The work was inspired by the landscape around my grandfather’s hometown of Terre Haute, Indiana, a location nicknamed “The Crossroads of America” due to the junction of major north-south and east-west national highways within its city limits. The Swope Art Museum rests on the corner of North 7th and Ohio St. Across the street an iron sign marks the landmark “Crossroads of America” explaining its history. The Cleveland Museum purchased this painting out of a traveling exhibition entitled “Artists for Victory,” which consisted of works by artists who wanted to assist in the war effort. The exhibition opened at the Metropolitan Museum of Art in New York on the first anniversary of the bombing at Pearl Harbor. If you go and look at the museum website, it has a really nice entry on the painting, a high-resolution image, you can zoom in and out, but rest assured, the version of the painting on the website looks horrible in comparison to the real painting. It’s just one of those things. You have to see it in person. There is no way to capture it. It seizes the light, reflects it, and at times almost appears to create it. The style is reminiscent of a renaissance painting in its attention to detail and light. But there’s a cartoonish quality to certain elements that reminds me of American animation, and the subject matter, well that’s the dead giveaway, it’s all American landscapes. But the level of skill, the style, the striking qualities all feel out of place and time, familiar yet something unto their own.

Like any artist, I’ve had my moments of self-doubt… of wondering what it all means, why anyone should care about my work, why I should care, or whether it’s worth anyone’s time at all. Over the years I’ve realized, art is a conversation between people throughout time. This notion has come back to me over and over again, and today I am reminded of it once again. Who speaks to whom?  I have always been fascinated with the concept of perspective. The voices we form. The subjects we choose. The way we see them. How we see one another.

If your work wasn’t included it may have come down to something arbitrary. I’m sorry. There were so many wonderful ideas and expressions in all of them, and it gave me great joy to experience each individual piece. I encourage you all to continue, perhaps mix it up with a new subject matter, and really refine your style. Or dig in, and take your existing work to its maximum potential, knowing you can do better than what you’ve done so far. Ask yourself, what are you trying to say?  Why are you trying to say it?  Regardless of why I did or didn’t reject your particular piece, these are questions you are going to have to grapple with alone. Art is odd that way, it’s something we have to create and experience alone, but in so many ways it’s also something we converse and connect over. It imitates and reflects our world so that we can see it and ourselves, and most importantly each other, in new ways we might not have before. But most of all, art is fun, and it’s cool. Something we can dip into on a quiet day in-between two things when we have a free moment, and just look at some interesting stuff, without thinking about it so much. So please come to the Swope and check out the exhibition, you never know what you might see. To the artists, please continue to submit, knowing that simply giving it a shot, and trying, is half the battle. At the end of the day, art, like life, is what you choose to make of it.

To those who were not accepted–I have been rejected from these types of things more times than I can count. So rest assured that I must not know what I am talking about. Also know that there are several pieces that I deeply regret not making it into the show. There were an extremely large number of submissions and a small amount of space.

In memory of Emily Cox Gedrick

(for a work in any medium)

Amy McInerny, Eye of the Hurricane

Alliance of the Swope Award of Distinction

Rachel Rosenfeld, In Lieu of Testimony: No. 4

In memory of Philip Milliren

In memory of John Laska

In honor of the 100th birthday of Barbara H. Oram

In memory of Ted Prose

Alliance of the Swope Award of Honor

to be announced at end of exhibition

Mark Burkett, Over My Head

Kenneth Probst, Trumplandia: Not a Place But a State of Mind

Michael Pittman, In the Second Before

In memory of Phyllis Dye Turner

(for a work on paper)
Allyson Midgley, Funky Fish No. 2

In memory of Robert E. Thompson

Danette Angermeier Memorial Fund of the WVCF Award of Merit

Zachary Doan, Lightning Along the Coast

Zachery Doan, Lightening on the Coast