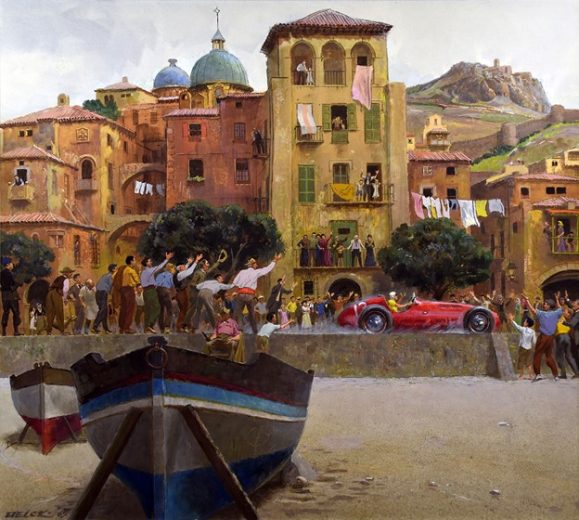 The excitement is palpable. Townsfolk are gathered along both sides of a Mediterranean street, flanked on one side by stuccoed buildings, a distant mountaintop reminiscent of the ruins of Messina, and, in the foreground, a seawall and sandy shore. The entire town seems to lean in, pulled into the vortex of the racecar’s velocity. The white-helmeted driver waves back as they cheer on the speedy red Maserati—number 13. Even the laundry festooning the air above joins in the celebration as colorful rectangles lift in the breeze. Stationary fishing boats are propped up on the beach at the lower left of the painting, attended by a lone man who appears to be drowsing, oblivious to the hubbub, clutching a bottle in his right hand.

1960 Local Favorite, Mediterranean Road Race was painted by Peter Helck, a notable American artist who specialized in depicting racing cars. The seeds of this inspiration were planted in 1906, when he witnessed his first race for the Vanderbilt cup on Long Island in 1906:

On the narrow oil-soaked roads I saw daring men guiding and controlling fire-spitting monsters at speeds of 80 to 100 miles-per-hour, slewing around curves in clouds of flung earth and exhaust smoke, scattering intruding spectators, emerging from perilous skids and then thundering off in the pale Long Island mists.

His fascination with these early, fire-spitting racers continued to fuel his creative work for the duration of his career. 1960 Local Favorite, Mediterranean Road Race was included in an exhibition at the Swope, 60 Years of Speeding Cars: An Exhibition of Paintings by Peter Helck in May 1966. We are pleased to celebrate our own locally favorite race, the Indy 500, with this delightful painting.

Featured in Terre Haute Living May 2022.