A young boy gazes, unseeing, with what could be described as a 100-yard stare, out from the confines of the rectangle into the viewers’ space. The background is a blank white screen, an inscrutable void. The child, who is Black, is contained by the whiteness surrounding his form. White light is reflected off his facial features and hands, suggesting that he stands before a colorless veil. His hands seem to float weightlessly as he holds the black straps of his backpack with an inexplicably light grip, despite the apparent weight on his shoulders. The straps’ dark stripes echo the vertical shadow that nearly bisects his face, running from the tip of his nose to the softly brushed downward pointing arrow of hair on his forehead. He seems resigned to his fate, imprisoned as he is in a vacuum.

Happening Now at the Swope: 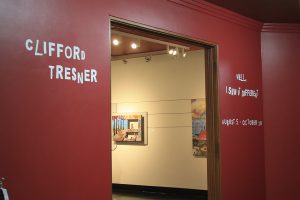 Well, I Saw it Different

“In the simplest terms my work is about questioning. I tend to question everything and doubt the answer. I learned quickly from to temper my questions and accept answers for what they are. In the studio I have freedom to question and doubt. While individual works may deal with specific subject matter, the underlying structure is questioning the nature of relationships. What happens if I do this or that to a material, or place one object adjacent another? I am constantly working out the elements of a composition, balancing what I know of design and craft with fine art practices. When I have provided enough answers via the “art object” I question if I was asking the right things in the first place. Then comes a period of destruction, dismantling, or taking apart. Through this process, I come to terms with my inquisitive nature. I revel in it, and during a cycle of creation and destruction, arrive at an answer I can live with. When making a successful piece, walking the line between its content and form, I realize how interconnected my practice is with all aspects of my life.
My influences are as varied as the way I piece my work together. I take great pleasure discovering other artists’ work, analyzing how they are perceived, and taking what I need from them. All things relative, I borrow my historical perspective, sense of craft, conceptual flexibility, playfulness, and connection to materials from the likes of Marcel Duchamp, Anthony Gormley, David Nash, Cy Twombly, and Leonardo da Vinci. This is by no means a definitive statement, but it is an effective introduction to my work and myself.”
-Clifford Tresner 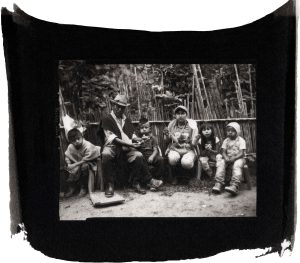 This work, entitled ESX, which means COCA leaves in the Yuwe language, seeks to deconstruct colonial and postcolonial visual narratives of the coca plant. When the conquistadores arrived in America, they took over the Incan Empire of coca leaves and enslaved its people with it. For centuries, the church demonized the plant and condemned the indigenous people to reject their ancient practices. With the invention of cocaine, the plant faced extermination under international laws. Colombia, my native country, has suffered greatly due to the fifty year war over cocaine.

These series of portraits were taken at the Wasak Kweswesx School in the Nasa indigenous reservation of Toribio, Cauca, Colombia. At the school, the Nasa children are educated in the ancient rites of the coca plant and their relation with their weaving and spinning practices. For the Nasa, the coca plant and the Cabuya plant that they use to weave and spin are considered sacred. The cabuya fiber on the leaves symbolizes the hair of mother earth. Classes are instructed by a traditional doctor called ‘the Wala’, along with six teachers, and one counselor to train these children to become traditional doctors, midwives, or cultural leaders and thus to ensure the continuity of Nasa culture.

For these handmade photographs, I used a large format camera and printed the negatives first with the XIX century Platinum-Palladium photographic process on Arches paper. I then printed some of the  photographs on handmade paper done with recycled paper and coca leaf fiber.